The love spectrum. Or I love Illy Coffee but I don’t want to marry it. 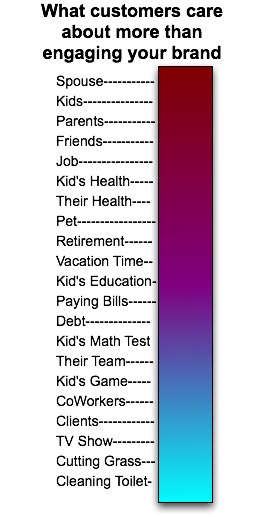 I really love my Illy Coffee. Really,  I do. But I’m not a fan of it on Facebook and I don’t even know if I could follow it on Twitter – and I follow a lot of people. Heck, if I could get a coupon or something for the simple act of following Illy maybe I would.

Am I really saying this, a guy who’s job it is to advise brands on how to use social media?

Yeah, I am saying it and it’s something that needs to be said with all the Koolaide sipping going on.  Just because someone has an affinity for your brand it doesn’t mean they want to engage it during their spare time – if they actually have spare time. I haven’t had any of that since my first daughter was born.

People have priorities and it’s a good idea to think about where your brand fits into that list of priorities before expecting an entire demographic to be it’s friend. And then share this relationship with their friends and also generate content for you for free.

Sure, brands that illicit passion can have often have a core energized base of believers who want to interact and discuss the brand – like Harley owners or Mac users. And technical products often have user groups. But if you market a packaged good or a service, you probably shouldn’t expect social media to do the same job your push marketing has been doing. And maybe “friend” isn’t what you want your customers to be in the first place. (Think critic, member, or advocate.)