Lost. Is everyone feeling as let down as me? Let’s find out.

What I found to be a rather disappointing finale to ABC’s Lost is perfect time for a little sentiment analysis fun using the social media monitoring tool Social Radar. What do I expect to see after the end a show that was much loved show?

I’m expecting to see a real dive in some pretty positive sentiment overall. Maybe not a wholesale hate fest but some definite disappointment. So what does a quick analysis tell us?

First there are a lot of positive things being said about Lost in general. Not surprising. But there are still more people “disappointed” than “satisfied.” Seems I’m not alone but not everyone agrees with me either.

So now lets look at the content of posts. Here the vast majority of references to “Lost” have positive sentiment. That makes it appear that most people have some pretty good things to say about Lost over our allotted time period of  30 days.  Maybe I’m wrong. People may have been pretty happy about the way the show was ending. 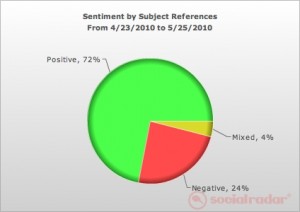 But then when we look the actual posts about Lost things start to get a little more mixed. So maybe I’m on to something – people aren’t entirely happy with the way the show is winding down. 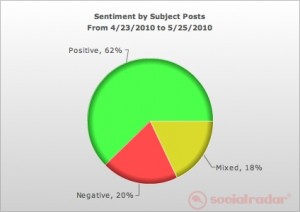 OK. So now for the true test. How has the sentiment changed day to day. This shows a huge spike in negativity on the day the second to last show aired and then a more mixed but also more positive take on the very last show.

This tells us there are more people happy about the ending of the show than feeling let down, like me. So way to go Lost writers, you made most of blogoshpere happy, just not me.